My First Look at QT

So this weekend I took a look at QT, in order to a leg up on some technology. I well be reporting my first impressions of QT and any problem I might have. Currently using a Laptop with 8gb ram, I7 core and Windows 7  OS, so for the most part should have no problem using whatever software.  I also note that this post may be a little short but I am just looking at making a hello world tutorial for myself and a first glance of what I might find.

"Qt is a cross-platform application and UI framework for developers using C++ orQML, a CSS & JavaScript like language. Qt Creator is the supporting Qt IDE." (From the Site).  Now in my own words I simply put it as a UI builder but that is my description before using the software and just based on the site details.

Starting without any tutorial or guides I wanted to just push through and see what I can do. So I stared up the program and already see some of thinking I don't know but I also see some that are simple enough to know what they mean.

The first thing I did was click new Project and HTML5 application, since I have a good amount of background I went with what I already know. These were the files I was given on the creation of the app... 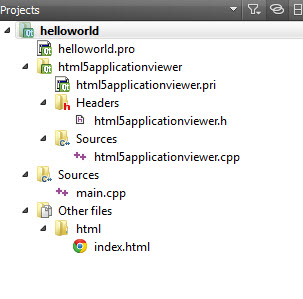 So now what? What I tried doing was going in debug, what I was thinking was that it would run the program and just do a basic debug mode like in visual studio with any application (run and report if any problems). A pop-up appeared and inside reported that no debugger setup, I will return to this later but for now just conscious as to how I can just run it for the first time. Key words I looked for was "Run", "Deploy", "Start", and the first thing that I found was Run under the build tab. I later figured out the Green arrows also run the application. The following is what appeared...


Now I just wanted to see where the text was in the code and change it to "Hello Anthony!". So the first file I looked at was the .html and edited the lines 33-36. When I clicked run, I did not see my changed!? The next thing I did was look into the other files to see if there were other places the original text ("Hello World HTML5") might. I found nothing so the second thing I tried was rebuild and sure enough it worked! So For now I will continue to play around and see what I can do from the tutorials.