I have a lot of experience from web development so I decided to take a blackjack game that I created in JavaScript and just edit it enough to be published on the window 8 app store. I will include a lot of my experiences but also my opinion. It took me about a month to make this game, the content and the functions within the game. The styling I edited later in the game, but in the beginning it was very dull for the most part and not very metro style looking. Don't have the original image of what the game looked like but just take my word that it needed improving. Here is how it looks now...
...As the picture explains and what I have not told yet is that my game is called "BlackJack the King of Cards". If you would like to download the game you can find it in the market under free card games.

Ok, so lets say you have an window's 8 app ready to go. You go to the Store tab top of your visual studio window and from there you create a package. This is all easy and its not until you finish packaging you app that things start getting more complicated. In order to complete your packaging you need to test it against the Microsoft kit, which in my opinion was annoying but it shouldn't be a problem if you debugged or ran you program before hand.


"Windows App Certification Kit" starts up and the process begins. It does takes a while and sometimes the program crashes if you are trying to do other things while its running. So don't touch anything while its running! Just let it do its thing, the program will start your app a few times and close. After its done look for any problems if any. The only problem I had here was that I wasn't making sure that my images were loaded in canvas before calling to them. So make sure you have accounted for special cases.
It is important to note that when I started publishing my app the kit was in an earlier version and would constantly crash during start up or not start my app. Since I've started the kit has updated numerous times and much of those problems have been fixed in the 2.2 version. This kit does nothing more than stress test your app so it comes as no surprise that more test are to come...

Now to get down to the detail in publishing your app in the store, there are eight section in the Windows 8 app store however two sections Services, and Notes to the Testers are not required to be filled but the rest are. 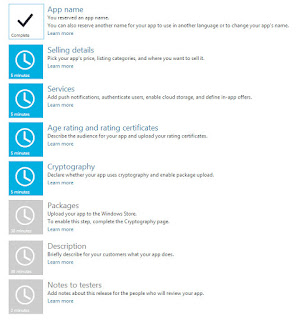 I started my first attempt to get published in mid March, 2013 and didn't actually get published until the middle of April. I can say experience wasn't too difficult to figure things out but there was a few mishaps when I sent my app out to be certified. A few of my problems I had were with the store itself, such as  different reports, even if I made no changes! That's just reattempting with the same code and inputs for the app store fields,. Now lets talk about the reasons I failed and how I corrected them.

The first and most important reason why I failed was the rating of my game. In my opinion and by the esrb online self rating system, my game should be an rated "E" game. However Microsoft's windows 8 store will not let me publish my game unless it is rated "R". Despite that fact that my game is called Black Jack, I have no systems in place that actually let the user play with money and I never play on to add that function. Over looking this there still is an issue with the app not having a GDF file attached. If you don't know what I'm talking about you can look at the resources in the bottom. Either way in order to publish an windows 8 app you need to create a GDF file and the only way you can attach it is with a c++ linker. Now when I did this I lost the ability to say my app works on Arm devices which was only because of the c++ linker. This was some what annoying and it does not seem to bother the app store that in the GDF file I claimed my app to be "E".
The second reason my app failed was the actual windows store itself problem. First it was telling my app was not unique, which I overcame by submitting my app with the definition of "Unique". This problem was never reported again... Next was it telling me my comments in the description were not detailed enough. Once it even came back with telling me caption text for the app was not clear enough. This because of another problem with the windows 8 store I had. When I went to fill out the Description section ever time I tried to add text to the caption in the screen shots it would clear. I overcame this by just submitting multiple times to the Description section.
This last note wasn't a problem but I thought it was interesting, when you need to package your app you have a file that you must submit to the store. Well there is also a tab in visual studio that should bring up the store and allow you to submit that way. However clicking on the tab at that time didn't work and I have to drag and drop manual. What was slightly more annoying was that I had to manual drop each version of the packages as there is the 64 bit versions and 32 bits version.

I really like the windows 8 store, but in the beginning there was a lot of problems. Thankfully there was no issues with my html code. If you read the link in the resources on creating a GDF file I think you will find all you need for getting published. A lot of the problems I had explained here, have been fixed but some of them still remain and the market can only improve (I think). I don't like the rating system that is in place and a lot of the reports I got were minor and easy to over come. Either way if you have a some code and would like to share it to the world I would recommend giving the windows 8 store.