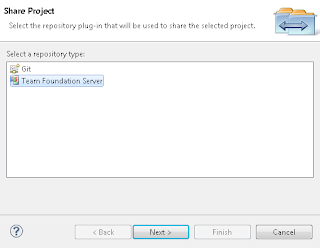 This article is from the experience I gain while setting out to complete my capstone and a point in time where I was exploring that ways to manage a team. I also wanted to help move things forward with the process for the team to code rather than spending more time on design. My capstone was along the side with three other colleagues and we did not all have the same idea with what systems or tools should be in place to help us achieve our tasks. Still after the fourth change of repository system in my team, I figured it was time that I took charge and started making changes for the better with my suggestion to use TFS. Plugin :  TFS Plug-in for Eclipse | Eclipse Plugins, Bundles and Products - Eclipse Marketplace Right Click Inside Project Explorer > Team > Shared Project The following plugin behaves much like the native built-in tool for visual studio but with a slight twist for the  tab locations because of how eclipse is setup. At first when I started researching thi
Read more

Visual Studio "Access Denied" When Checking in with TFS

December 29, 2013
The problem was that when I went to check in changes with Visual Studio, it would report back saying I did not have permission. I knew it couldn't have been the TFS setup because I had everything configured straight forward for a single user which was just me and I know it was fine since it was working a few days ago. The only thing that changed on my machine was the that I lost access to my domain account that I was working with. So I created a second account that has administrative permissions, which might have lead me to this problem. Resources You may receive an "Access is denied" error message when you try to debug a Web application in Visual Studio .NET, and you have administrative permissions  -  First search got the job done! Access Denied on TFS - Stack Overflow  - Just looking at other reasons that could have been the cause
Post a Comment
Read more

December 29, 2013
While cleaning up some code in the webconfigs of an Asp.net MVC application I came across a line of code to which I had no knowledge of and even more so was showing up as an error.  I asked myself was it's purpose and most of all why was the Intellisense saying "The 'inheritInChildApplications' attribute is not allowed."? Resources How do I allow all users access to one route within a website with integrated auth? - Stack Overflow Changing ASP.NET web.config inheritance when mixing versions of child applications - Scott Hanselman Conclusion All the information can be seen and found in the following links but after looking at the comments you will find the reason behind the shown error.  " Be aware that the inheritInChildApplications attribute is not part of the web.config schema (even in VS 2012) so you will get blue  squiggles  under it with a message of "The 'inheritInChildApplications' attribute is not allowed." It will, however,
Post a Comment
Read more 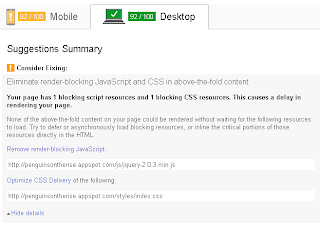 For the most part I have already done a lot of the work for this and this has always been something in my practice to do. In the past what I have done is render all javascripts at the bottom of the page and all styles at the top inside the header. However with this application and since so much of my code is customized and mineralized, I believe I have a small issue with the Jquery taking up more time than the css to load. So Close to 100/100! Code (function () { var script = document.createElement('script'); script.setAttribute("type", "text/javascript"); script.setAttribute("src", "js/jquery-2.0.3.min.js"); document.getElementsByTagName("head")[0].appendChild(script); Resources Remove Render-Blocking JavaScripts - PageSpeed Insights — Google Developers HTML script async Attribute  - This might have also worked but look at later. javascript - load jquery after the pa
Post a Comment
Read more

At the Start of My C# Research

December 20, 2013
This article is a list of resources that I used way back at the start of my career with C#. Since there are a lot of C# tutorials already out I just wanted to write out some of my experiences and topics that I was curious to learn when starting out. The main reason why I wanted to used C# for programming was for Asp.net MVC applications and toward the second year I discovered XNA. Getting Ready at the Start!     If you're a Java Developer the  using Statement  is much like a import and include in C++. Having experience with both languages doesn't hurt and speaking from my own experiences with both languages, C# is probably the easiest compared to all of them. And for multiple reasons, but mostly because of Visual Studio's Intellisense in my opinion.  C# language itself Random resources that I used, for multiple projects. Visual C# Resources Delegates Tutorial C# Short Type  - Sometimes its just good to compare  ( Java , C++ ) . Creating Custom Routes
Read more

December 20, 2013
Update     Adding a selected and disabled attribute works as well and doesn't require any javascript, however refreshing the page does not reset the value. Doing a hard refresh does reset the value (for firefox) . However there seems to be a placeholder attribute in draft (as of november 2014).  " When there is no default option, a placeholder can be used instead". However in the example the placeholder value is still selectable after a choice has been made. This may not be what you want, so combining the two attribute and the javascript below  guaranty the behavior I'm looking for.  I could even support older browser with a little work.     The Purpose of this article is to make a placeholder in select that should help prevents bad selections with and make it easier to validate if no selection is made. In this article I will assume you have Jquery and the Jquery Validation plugin installed on your web application and similar html code displayed like the the fo
Read more

Flash Videos not in full view for the Chrome Browser 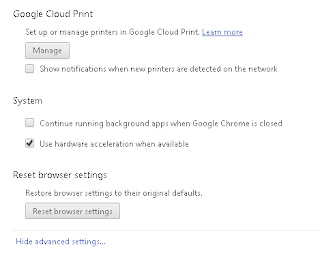 For a while I had issues with Adobe Flash in the Chrome Browser, immediately my assumption was that I had a incompatibility issue with Adobe Flash. So I started installing older version  of Adobe Flash from   11.9.900.170 and back on Window Plateforms.  This did not help so I soon started my research which I did not bother to install older versions of Chrome since it had never been a problem before.  Resources (weren't helpful) No video in full-screen mode | Flash Player Adobe - Flash Player Adobe Community: Full Screen Mode is not working for adobe flash player Full screen mode - YouTube Help Adobe - Flash Player : Help - Display Settings My Solution     Turns out my problem wasn't caused by an update but by me and my playing around with settings. Which I never took into consideration since I don't often watch videos in Flash. If I can help it I will watch Youtube videos in HTML5. Also I was at the time of playing with things look for ways to improve
Read more
More posts